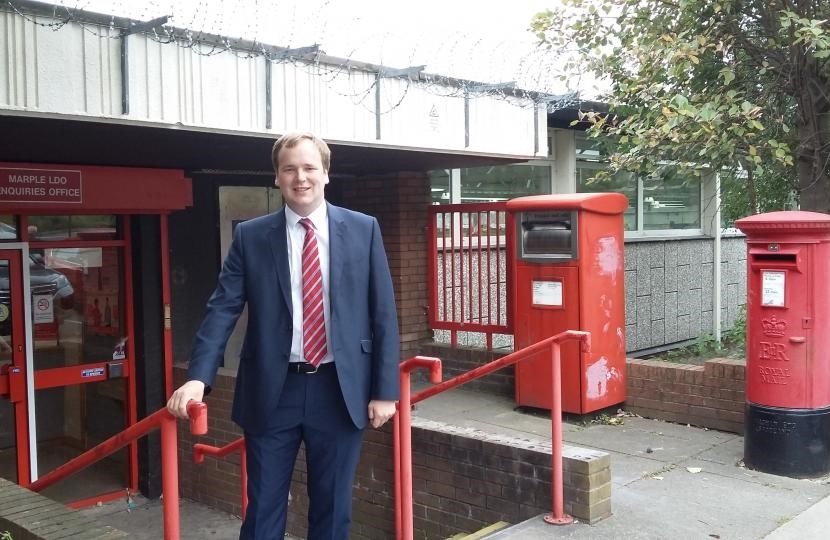 William Wragg, MP for Hazel Grove constituency, today expressed his disappointment at the news that Royal Mail is set to close local delivery offices from next year, despite a long-running campaign against the closures.

Royal Mail confirmed today it is to relocate its delivery operations in Bredbury and also in Marple to its larger sorting office in Stockport from January 2018, following a business review of its services.

William Wragg has fought a campaign on behalf of local residents opposing the closures since they were first proposed in 2016. He organised a local petition which attracted over 3,000 signatures which he presented to Parliament and held several meetings with Royal Mail to urge that the offices are kept open and the current service is maintained.

William was, however, able to secure assurances from Royal Mail’s Chief Executive that, whatever the outcome of the review, there would be no job losses for the 50 staff working at the two depots; and that, should the offices be closed, alternative arrangements would be made for customers living in and around Bredbury and Marple to be able to collect packages and mail locally without having to travel into Stockport.

“I am of course disappointed that Royal Mail have decided to press ahead with the closure of the Bredbury and Marple delivery offices despite strong local opposition. They provide a service that is very convenient, and each employ dozens of local people. I had hoped the strength of local feeling may have persuaded Royal Mail to take a different course of action.

“I am however pleased that, by honouring the commitment Royal Mail’s Chief Executive gave to me personally last year, there will be no compulsory redundancies, and that alternative arrangements will be available to collect mail locally. I now urge Royal Mail to work hard with their employee’s to ease the transition in their working arrangements and with their customers to minimise disruption to their delivery services.”

"I wish to thank all of the more than 3,000 residents who supported my campaign to keep the offices open."

Royal Mail confirmed today that there will be no compulsory redundancies as a result of the relocation. Customers in Bredbury and Marple will be able to collect any undeliverable mail from local post offices.

A spokesperson for Royal Mail said:

“These moves are part of Royal Mail’s ongoing transformation of its business to increase the efficiency of its operations and provide delivery offices that are fit for purpose for our staff and our customers. There will be no impact on deliveries to our customers, who will continue to be served by the same postmen and women.”