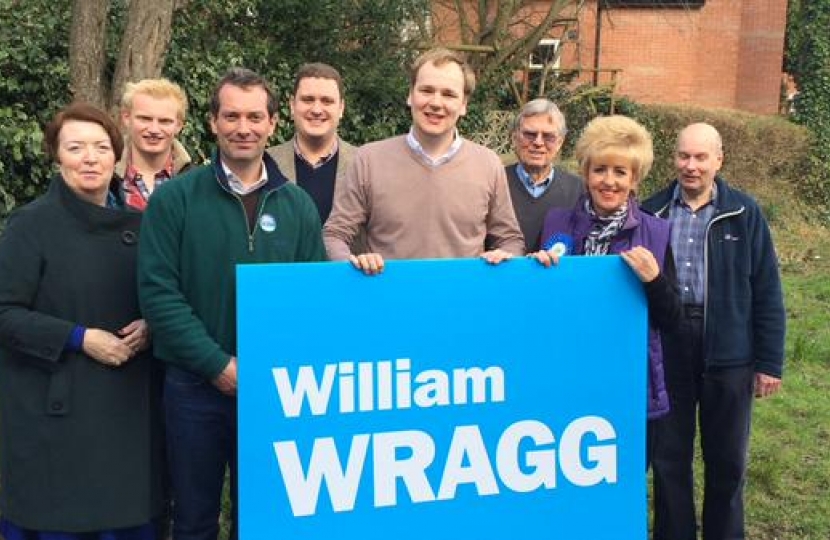 William Wragg was first elected for the Hazel Grove Constituency at the 2015 General Election with a majority of 6,552. He was re-elected in 2017 by a majority of 5,514.

William grew up in Hazel Grove and served as a local councillor for the Hazel Grove ward on Stockport Council from 2011-2015. As a former chairman of the Hazel Grove Conservative Association, William has real political experience, being the first Conservative Councillor to be elected to the Hazel Grove ward since 1992, with an 8.6% swing from the Liberal Democrats.  William works hard as a community campaigner, having organised successful petitions and led campaigns to protect local bus routes, instigate park refurbishment and retain school crossing patrols.

William lives in the heart of Hazel Grove and was educated at local state schools. He then became a primary school teacher in a state schools in Manchester, this means he cares passionately about helping our young people get the best start in life and to fulfil their potential. William has worked as a school mentor for children with special education requirements. William also worked as a school governor at Hazel Grove Primary school. His priorities for the area are economic growth and jobs, raising educational standards, a strong NHS, giving constituents a say over Britain's EU membership and reducing immigration.

Since being elected William has been successful in the campaigns to grant Stepping Hill Hospital Specialist Status and to keep Stockport Magistrates Court open.

In Febuary 2016 William was also elected to sit on the Education Select Committee to look at how the Government is inplementing its Education Policy, there budget and the saftey and wellbeing of all students of all ages.

On winning in our area, William said: "I wish to thank all those who voted for me, but now that the campaign is over I am determined to continue to work on behalf of all local residents, regardless of who they chose to vote for. I am a passionate campaigner for our area and I am proud of my record of action on local issues. I am committed to continuing this hard work in the years ahead.

I am extremely proud that you have given me the great honour of serving the Hazel Grove constituency, my home area, in Parliament. It is a duty I take seriously and a challenge I take whole-heartedly.

I will stay true to these commitments and secure the improvements that our area needs. The hard work begins now, and I look forward to the challenge of making this a better place to live and work.

I recognise the huge trust that local people have placed in me. I won't forget where I have come from, and will stay true to my promises and principles.

Regardless of how you voted, I am commit to working for local people."