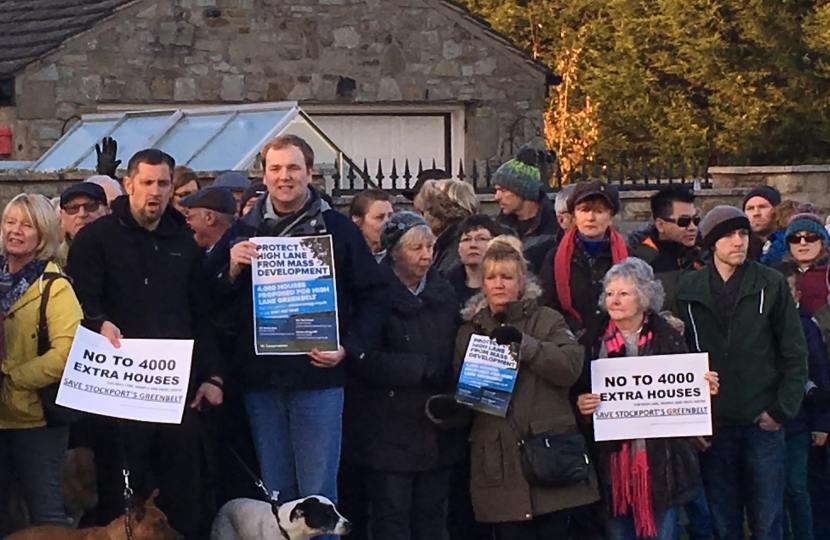 This week I submitted my official submission to the official consultation (which closed on Monday) on the latest draft of the Greater Manchester Combined Authority’s Spatial Framework (GMSF), which will decide where major new housing developments will be built in Greater Manchester and Stockport over the next 20 years.

The closing date for responses to the latest Greater Manchester Spatial Framework consultation was Monday, 18 March. Many hundreds of residents from across the constituency engaged with the process, which I was extremely grateful for. These views helped to shape my own response, which can be found on the attachment link below.

I based my comments on the many letters and emails I have received about the plans, and the hundreds of conversations I have had with local people about this issue over the years of being an MP.

Thanks to pressure from local people, the combined efforts of local councillors and cross-party groups of Greater Manchester MPs, The Combined Authority was forced to drastically rethink its plans following the first stage consultation. The introduction of a national brownfield register, many brownfield sites have been found to build 5,180 homes in Stockport, with a further 5,100 homes to be planned on mix of brownfield land and greenfield land. This has meant that the new draft GMSF envisaged 3,700 properties to be built on existing green belt, down from 12,000 as originally proposed in 2016 - a huge reduction.

I have consistently urged that the overall number of houses needed to be reduced and that where houses are to be built we should follow a robust brown-field-first policy. I therefore welcome the fact that the revised GMSF plans do both of those things.

However, it is clear that residents still have a number of serious concerns about the updated proposals. These include permanent loss of green belt land; loss of access to countryside, green space, recreation land, and wildlife habitat; road traffic access around housing developments and the wider implications on traffic and congestion across the local A-road networks, which are already stretched over capacity. There were also concerns around the air quality consequences of increased traffic and congestion and the pressure placed on local amenities, such as schools and GPs surgeries with the increase of people and families to the area.

Based on the feedback I have received from residents I made the following recommendations to improve the current Draft GMSF. Stockport Metropolitan Borough Council should identify and develop further brownfield sites and no building on the green belt should be permitted until all local brownfield sites have been fully developed or explored. The proposed sites should be dispersed to smaller sites allowing better use of brownfield land. New school places and healthcare facilities will undoubtedly be needed as well as a comprehensive traffic management plan, to ensure that these services and infrastructure will not be overloaded.  Plans must also provide protection for wildlife corridors and ancient woodland.

There is a long way to go before any of GMSF sites proposed in our local area will receive widespread support, and further local public consultations, in conjunction with neighbourhood forums, must remain top priorities.

Thank you for everybody who took part and let's continue to make our collective voice heard as the Greater Manchester Combined Authority makes its decisions going forward.

My full official submission to the consultation is available to download in the link below this article.