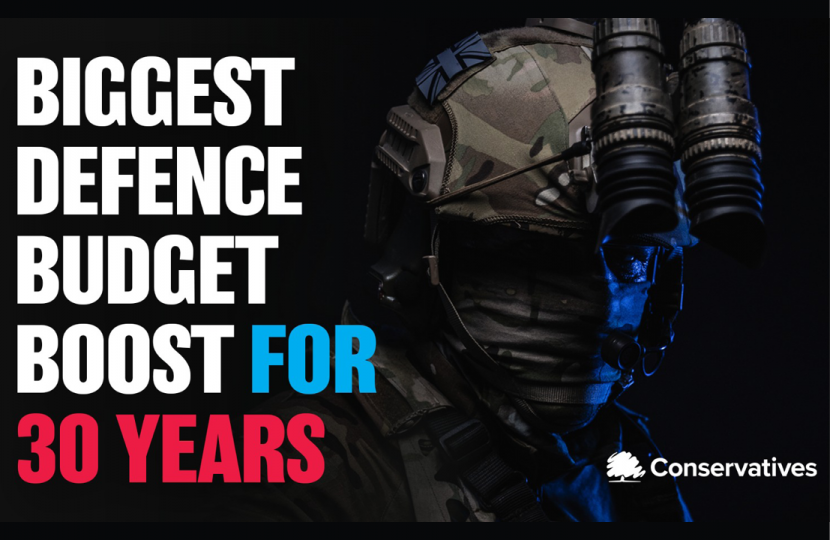 Britain's armed forces are due to receive a record funding increase to help continue to project British values and interests around the world, and to increase our capabilities in an uncertain global climate.That’s why we will make the largest investment in our nation’s defence since the end of the Cold War. Over the next four years we will invest an additional £24.1 billion – far exceeding the promises we made in our manifesto. This will help create 10,000 new jobs a year, revitalise British shipbuilding and ensure that the United Kingdom is a global, outward-looking nation now we have left the EU.

We are doing this by:

• Delivering a funding boost of over £24 billion for our nation’s defence, ensuring we keep our nation safe from the evolving international threats we face. This commitment is the largest investment in our nation’s defence since the end of the Cold War, giving our defence budget an extra £24.1 billion over the next four years.

• Creating 40,000 more jobs over the next four years, across the whole of the UK. Spending on defence projects, secured with this funding, are expected to create up to 10,000 thousand jobs annually across the UK. These will reflect the expertise and ingenuity of British people both inside and outside our Armed Forces harnessing the UK’s skills in construction and science and reinvigorating those industries in the coming decades.

• Revitalising British shipbuilding by creating and safeguarding thousands of jobs in UK shipyards. This funding has come alongside a steadfast commitment to finance the UK’s order of 8 Type 26 and 5 Type 31 frigates, which are currently being constructed on the Clyde, creating thousands of jobs.

• Reaffirming our commitment to build our next generation warships – the Type 32 – here in the UK. Last month we committed to build three Fleet Solid Support warships, with contractional reequipments which will ensure a significant proportion of the build and assembly work will be carried out in the UK. This commitment will create hundreds of highly skilled jobs across the UK.

• Creating a National Cyber Force and Artificial Intelligence agency - to protect our people from harm. Our new Cyber Force, will be a joint unit between the MoD and GCHQ, will help to protect Britons at home from cyberattack but will also deploy offensive capabilities against adversaries.

• Creating a new ‘Space Command’, with the first rocket launched from Scotland by 2022. We promised in our manifesto that we would deliver the UK’s first UK Space command based at the RAF High Wycombe. Space Command will give the UK the capability to deploy weapons and military satellites without relying on other nations.