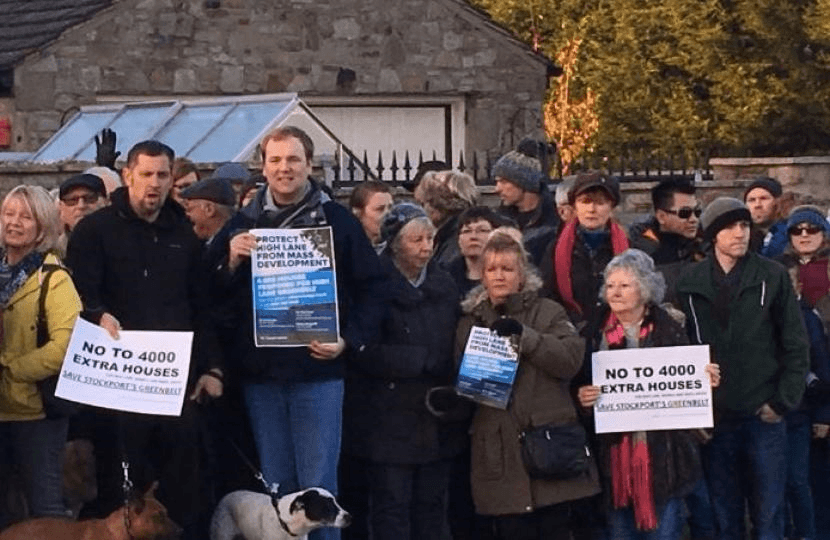 William Wragg MP’s campaign to save local greenbelt in Stockport has achieved significant success having secured major reductions in the number of houses to be built upon it, following a revised Greater Manchester Spatial Framework plan.

After months of delay, the Greater Manchester Combined Authority has published its updated draft of the GMSF. The controversial plans which originally sought to build on more than 8% of Greater Manchester’s greenbelt. However, after attracting criticism from across the political spectrum, and its first consultation received evidence from thousands of angry residents, the Authority was forced into a re-think.

The updated proposals will instead see the number of new houses earmarked for greenbelt land in Stockport drastically reduced from over 12,000 to 3,700. In the constituency of Hazel Grove the figure has been reduced from 4,000 to 1,250, and critically plans to more than double the size of High Lane Village with an extra 4,000 houses has been reduced to 500 extra.

However, in order to fit in some of the new homes needed, new sites at the former Offerton High School, Gravel Bank Road and Unity Mill in Woodley, and Hyde Bank Meadows, Romiley have been suggested for additional housing. These sites will however be smaller than the original High Lane proposals, at about 250 homes each, and will in parts use brownfield land.

The campaign to protect Greenbelt around Hazel Grove and Stockport has been spearheaded by William Wragg MP since 2015, and was a key feature of his re-election campaign in 2017. Mr Wragg publically called for the Combined Authority to “Go back to the drawing board” in 2017. He collected over 4,000 signature petitions against the proposals, spoke in Parliament and pressured decision makers to modify the plans.

Today Mr Wragg welcomed the reduction to the amount of greenbelt land to be released, but said the policy of brownfield first, inclusion of appropriate infrastructure, and further local public consultation would remain top priorities with regards to the GMSF. He is furthermore keen to hear from local residents about their views on the updated plans, and a further public consultation on the plans will be held between now and March.

“Today’s revised plans show that when local people come together, and when politicians work together on a cross party basis we can make our voice heard.

“Since being elected to Parliament in 2015 I have campaigned alongside residents to protect local greenbelt, particularly around the village of High Lane, from the massive housing developments proposed under the Greater Manchester Spatial Framework. I been on demonstrations with local residents, led debates in Parliament, submitted a petition of from over 4,000 of my constituents to the House of Commons, worked with my constituency neighbours Mary Robinson and Andrew Gwynne, and lobbied three different Housing Ministers about the matter.

“Everyone accepts we need new homes building, but that does not mean sacrificing huge swathes of countryside without proper planning. I have consistently urged that the overall number of houses needed to be reduced, and that where houses are to be built we should follow a robust brown-field-first policy. I welcome the fact that the revised GMSF plans do both of those things, and that as a result of my campaign and the support of local residents, large areas of greenbelt and countryside are to be saved.

“I will now be looking at the details of these revised proposals and am keen to hear from residents on their views. What is needed now is a robust system of local consultations, especially around those newly proposed sites in Offerton, Woodley and Romiley. We should ensure the efficient use of brownfield land, and that any new housing developments are properly supported with additional transport infrastructure and local services. I will continue to work to protect local greenbelt land.”

UK leads the way in the distribution of COVID-19 vaccines🇬🇧🧬

The United Kingdom is setting the pace for the development and distribution of a COVID-19 vaccine. Roll-out commences next week.