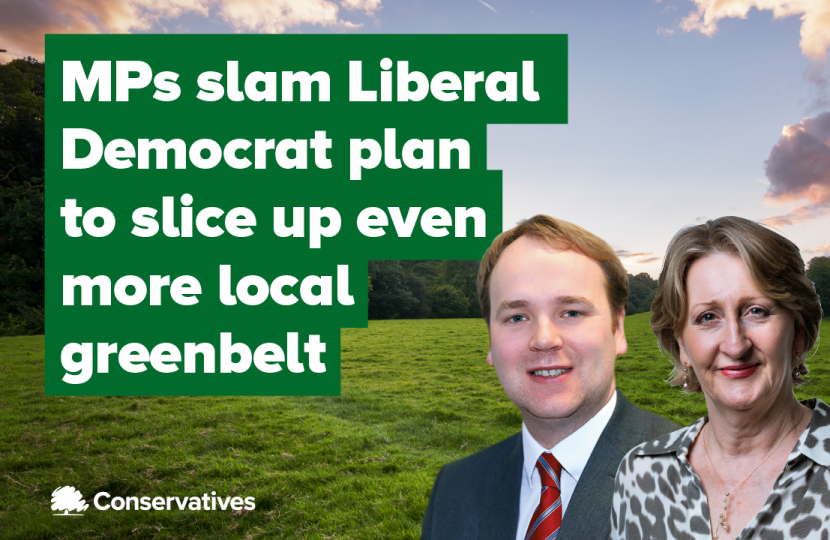 Conservative Members of Parliament William Wragg and Mary Robinson  have joined forces with local Councillors in their attempt to block a Liberal Democrat plan which risks vast swathes of our greenbelt via speculative planning applications by developers.

The Liberal Democrat group on Stockport Council will this evening attempt to withdraw Stockport from the Greater Manchester Spatial Framework (GMSF). This framework has received much attention over the last five years and local Conservative Councillors alongside the Hazel Grove and Cheadle MPs, have vociferously campaigned against mass building on the greenbelt and instead are in favour of re-developing brownfield sites.

However, currently, Stockport does not have a 5-year housing supply and therefore, without being a constituent member of the framework, would receive applications to bulldoze over swathes of our greenbelt not currently being considered. Using the most recent estimate, this would mean that Stockport would have to build an extra 900 properties than otherwise previously thought.

In a joint statement, Mary and William said: “We have consistently campaigned to have our green belt protected and sites removed from the GMSF. We believe that remaining in negotiations at this stage is the strongest defence of our greenbelt, and allows us to shape the future of our areas alongside local residents”.

They added: “Notwithstanding our deep-rooted concerns in the direction of the Greater Manchester Spatial Framework, to withdraw ourselves at this stage is nothing short of a disaster; a political stunt which threatens our much-loved green spaces,”

“That is why we are supporting an amendment to this plan brought forward by Conservative Councillors on Stockport Council. The amendment seeks to work collaboratively with Council Officers, local residents and Government to ensure that whatever plan is put forward is in the best interest of those we represent. We whole-heartedly encourage Councillors of all parties to back this amendment in the best interests of the people of Stockport. All options should remain on the table when the final plan is revealed next month.”

Stockport Councillors are due to vote on opening the final GMSF recommendations to the public on October 22nd.