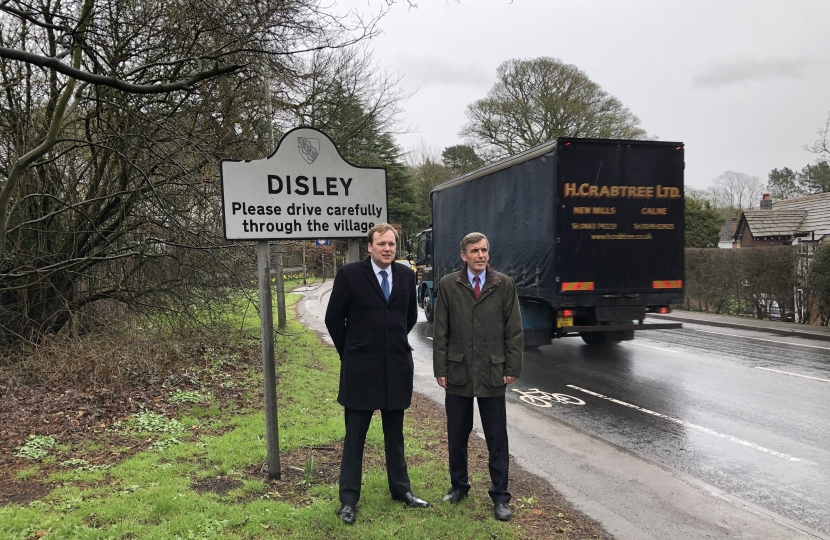 At a specially-arranged meeting, Macclesfield MP, David Rutley, joined Will Wragg MP, the Member of Parliament for neighbouring Hazel Grove, to discuss actions to help address problems facing local residents in Disley village in Cheshire East, and High Lane village in Stockport, with increased traffic and congestion following the opening of the A555 Manchester Airport Relief Road.

Both Disley and High Lane are experiencing significantly higher levels of traffic on the A6 and on local roads than before the opening of the A555.  Residents have raised concerns about the congestion particularly acute during the morning and evening commutes and their strong concerns about the impact of increased vehicle movements on air quality, already a problem in Disley which is an Air Quality Management Area and along the A6 corridor.

David and Will agreed to follow up on agreed actions with Cheshire East Council and with Stockport Metropolitan Borough Council, calling for effective and regular monitoring of air quality and traffic counts, and reviews of traffic light sequencing at key junctions, particularly at the Norbury Hollow and the Windlehurst Road junctions. David also continues to work with local elected councillors in Disley, in support of plans and funding for further mitigation measures for Disley village.

Speaking after the meeting, David said, "Residents in Disley village continue to experience significantly increased traffic levels, with clear concerns about air quality. It is vital that local councils take steps to more effectively monitor these concerns, so that the appropriate actions can be taken. I will continue to work with Disley Parish Council, Cheshire East Council and local MPs, to help to find solutions to the current concerns of local residents."

William added, "Residents in High Lane have been afflicted by congestion and poor air quality for many years. There are steps that the Councils can take to improve the situation and we are keen to work with all agencies to find a solution to this."